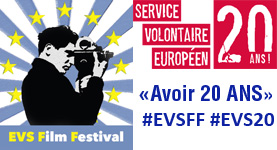 This year, the video contest aims to celebrate the 20th anniversary of the European Voluntary Service.

Organised by the French Erasmus+ Agency for Youth & Sport, the EVS film festival is inviting every person living in Europe, between 13 and 35 years old, to create a video lasting maximum 3 minutes, under the theme “To be 20, a part to play and get involved!”.

Current and former participants of the Erasmus+ programme are strongly encouraged to join in.
One special prize will be awarded to the best film sent by an EVS volunteer (EVS).
The three winners will be invited to participate to a “special” weekend in Montreuil (France) from 22 to 23 September 2016 to celebrate the EVS 20th anniversary and the Youth participation.

This was.This is: Online photo/discussion competition