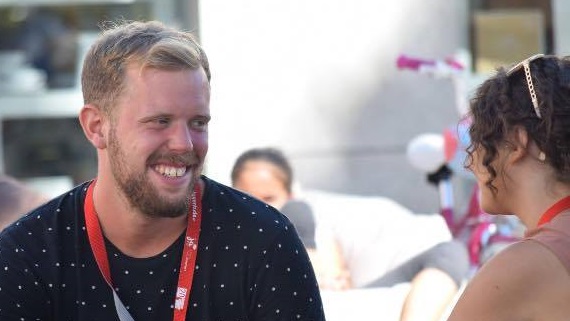 We met Marc Jungers, 25 (Luxembourg), to learn more about his experience in Portugal in 2016 with the SVE (Service Volontaire Europeén).

He tells us how this experience of over one year ago has had an impact beyond the 6 months spent in Porto de Mós – lasting up to these days.

After school and a couple of years of work, Marc realized that he was not accomplishing his potential in what he was doing. He took the decision to quit his job, then – and perhaps the reality he was accustomed with, by travelling around in America and Asia.

Around one month after his return and a bit uncertain about the next steps to take, he has found the SVE, somewhat by chance. As he describes, he crossed the program on the internet as a rather good surprise, actually.

`You know, I also thought that volunteering was all about investing a huge amount of money to treat the lions in Africa or the like`

He therefore emphasizes the importance of diffusing initiatives such as the SVE, which in fact provide all the resources to allow young people to have this experience.

You can learn more about it here.

Following this discovery, the arrangements were rather fast, he says. He followed an information session with the Service National de la Jeunesse (SNJ) and gathered all the practical information at the Eurodesk and within one month he was ready to go.

`Sometimes it can take longer, but I was lucky that this was project was open and I wasn`t completely sure of what I could do, so I took the chance.`

Marc`s trajectory is a good example of the advantages of remaining open and seizing the opportunity as it comes. Between ecological and social projects, his participation unfolded through the most diversified tasks, as he enumerates:

In parallel to these stages, he has also been responsible for updating the website of the association.

His trajectory demonstrates how the projects, while having a clear outline, also provide some flexibility and the possibilities of tailoring according to the demands – from both the volunteer and the context where he or she is immersed. From farming to social coordination, Marc also acknowledges that the greatest asset of this immersion lies on the human component: it was the contact with other volunteers from everywhere that represented such a breakthrough in his mentality:

`Back home I felt very often alone, whereas there you feel welcomed, because everybody is in the same situation (…) furthermore, the idea I had about Portuguese people has completely changed in relation to a cultural stigma back home. I knew about their kindness but not so much as I learned through the close contact and their ways of being.`

Alongside the professional maturity, Marc shows how the experience made him grow as a person at the time: by becoming more open, more aware of his perspectives and understanding of others.

Greatest accomplishment of all

More than a certificate or financial reward, the real value gained through this experience seems to last more than a piece of paper. As Marc states, his flexibility, openness and confidence about his goals – which seemed all over the place before his departure – were priceless gifts gathered through this decision to go.

Furthermore, he highlights how some of the contacts made there turned into true friendships –  thanks to volunteering, he has also attended two workshops in Braga and since the end of the program, he has visited friends in their homelands (twice in Turkey, three times in France), and is also planning a trip to Bali.

Apart from all the benefits: becoming much more open-minded, people-oriented, assertive about what he wants… did it have any `negatives`?

The structure and the administration of the program were not perfect, Marc states. Little problems come out every now and then just as in any workplace, but learning how to solve and deal with them it is also a part of the process. The real downside, though, it is almost another motivator:

`Now it is difficult to find something just as good as that.`

In conclusion, any advice?

According to Marc, it is especially good to go while young, because life might impose commitments (such as loans to pay, the settlement of a family or a fixed job) which won`t make it impossible, but certainly more challenging. He also emphasizes `there is no reason to fear, because everyone there is in the same boat`.

If you really know what you want, even better – then all you have to do is choose a well related program and dive-in!

But if not, well, why not trusting the odds? We all go through transitional phases of not knowing it all for sure and, as Marc illustrates with his case, trusting the odds and embracing a volunteering can actually make you figure that out!

`Obrigada` for sharing this amazing experience with us, Marc. We wish you and all that follow your courage the best of success!

Be our guest photographer!” competition

The European Commission has launched the Juvenes Translatores 2017, the translation contest for schools